Augmented reality (AR), not be confused with virtual reality (VR), has blown up in more than a major way. In the simplest terms, AR works by creating a composite visual combination of the real-world environment and virtual elements that change in response to sensory stimuli. In addition to things that directly stimulate the senses such as sound and touch, certain types of data such as GPS coordinates) can play a role in the way that the composite AR display is manipulated. The following is a simple breakdown of the popular ways that AR is used, how it’s defined, its history, its current industrial state and experts’ projections of its future growth.

The key distinction to make between AR and plain digitally enhanced images is the fact that digitally enhanced images aren’t interactive by nature. For AR to be correctly classified as AR, there must be an element of interactive cause-and-effect between its computer-generated elements and the environment viewed in its live feed. AR technology doesn’t just superimpose unchanging virtual graphics on a live view of the environment but creates a dynamic composite view that actively changes in response to input and movement.

The utility of AR technology goes far beyond just serving as a novel way to kill time with a smartphone while waiting for the train. AR technology can be implemented into the flat surfaces of things like business cards via barcodes that provide more information when scanned. Tactical AR technology use can cleverly circumvent the limited surface area of physical objects made to convey information through text, such as magazines and brochures, and flip them into a creative springboard for more active target consumer engagement with branded material.

One of the most important aspects of any plan that involves transporting or storing large objects is the need for accurate measurements of the exact spatial dimensions that you have to work with. Eyeballing the empty space in a new room that you’re considering moving into can only be so effective for gaining a legitimately accurate idea of what pieces of furniture will fit in which places. 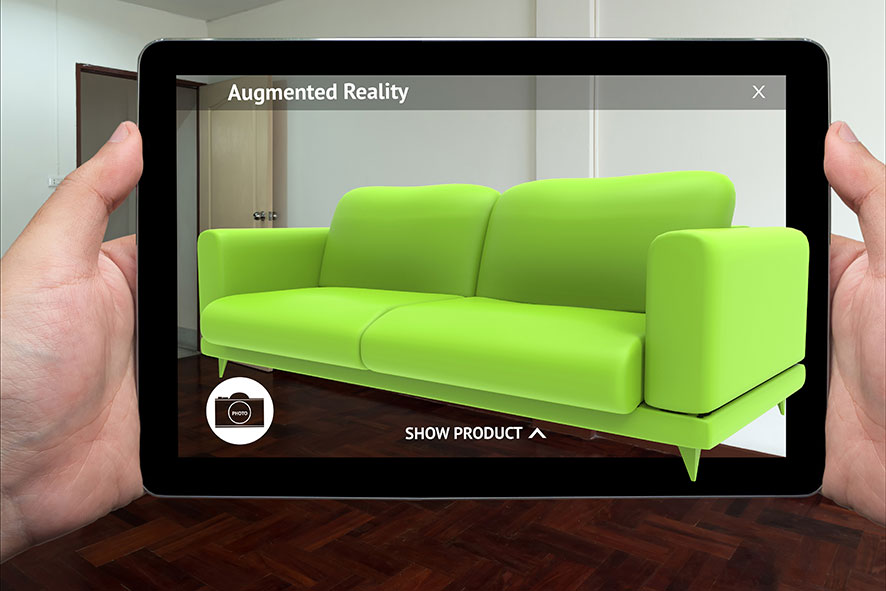 Through AR technology, computer-generated representations of objects that you might hypothetically place into any room can be shown to scale in a composite image of said room before anything is physically moved into it. Using an AR app to gauge the most accurate spatial allowances of a room before moving anything into it can save lots of valuable time that may have otherwise been wasted.

The ability that AR grants to properly plan the potential placement of physical objects applies not only to large and bulky items but also smaller, lighter things such as individual articles of clothing. Various apps have been specially designed to help users get an accurate visual on what they might look like when wearing certain outfits that they haven’t physically tried on in the real world just yet.

While AR’s current popularity surge is still a relatively young trend spike, it had already been well-established as a helpful resource for everything from natural resource management to healthcare in the years that preceded its current rising prominence. The first known predecessor to today’s standard for AR technology was brought to life in 1968 by computer scientist Ivan Sutherland. What Sutherland developed was a simple way for users to view wireframe drawings with the use of virtual graphics with a specially made headset, making it the first widely-recognized mixed reality HMD. The headset was so heavy and imposing-looking that it was named the Sword of Damocles.

Six years after Sutherland’s wireframe viewing headset, computer artist Myron Krueger created a specially manufactured laboratory environment with video cameras and projectors that allowed all within it to interact with silhouette projections. Krueger referred to the environment he created as the Videoplace, the world’s first official artificial reality laboratory.

Much like VR, it wasn’t until AR technology had already been implemented into numerous inventions for well over a decade until the well-known term used to refer to it today was officially coined. It was in the year 1990, about 22 years after its emergence in Sutherland’s Sword of Damocles, that the term “augmented reality” was coined by Boeing researcher Tom Caudell.

Approximately 8 years after the term “AR” was coined, AR’s industrial trajectory took it into the entertainment realm as the first use of the yellow first-down line on a Sportvision NFL game broadcast. In the following year, both the Navy and NASA found use for AR technology as a battlefield representation resource and visual navigation aid respectively.

In under two decades following its first foray into entertainment and simulated training systems, AR has been creatively implemented into interactive print media covers, software libraries, web browsers and even vehicle manuals. The wearable AR trend rose exponentially with the release of Google Glass in 2014, and just about two years after that, mainstream interest in AR technology surged to meteorically unprecedented highs with the release Pokemon Go. By 2017, combined investment in both AR and VR had broken through the billion-dollar mark.

Though it can be understandably easy for some to mistakenly refer to them interchangeable, AR and VR are fundamentally different from one another at the core. While VR represents an entirely computer-generated environment, AR is a composite crossover between virtual elements and a live view of real-life surroundings that said virtual elements are interactively moderated by. The current growth intensity of AR’s market value is significant enough to make many experts predict that it could eventually eclipse that of VR by nearly triple the size. Should this forecast turn out to be true, AR device shipments could surpass VR shipments by as many as 19.2 million units.

Though AR and VR may not be one and the same, market analysts have made a point to measure their most likely combined impact on the economy by 2020. Together, AR and VR are expected to create a grand total economic impact of just over 29 million within the next three years. In terms of the most probable growth scenarios for AR and VR headsets by 2020, the highest of all growth scenarios predicts that AR/VR headsets will most likely have a combined worth of just slightly under 10 million.

In 2016 alone, AR and VR collectively received an investment spike of just over one billion in total. Statista projects that by the year 2020, the grand total number of AR glasses shipped to consumers worldwide will likely reach a figure close to 5.5 million. The AR industry’s meteoric growth rate has given experts reasonable cause to forecast that its value could rise to about $90 billion dollars by the turn of the next decade. Because AR is still considered by many to be within the neonatal phase of its full potential as a computing standard, there’s no telling just how much more dramatically its value could rise given enough time and sponsored research to grow.

You've officially signed up with Limecube.

This may take a few minutes

An email with a new password has been sent to your email.

Please check your email (and possibly your junk mail) for further instructions.